Create an Account - Increase your productivity, customize your experience, and engage in information you care about.

Prior to 2021, the Town was a founding member of the South Bayside Waste Management Authority (SBWMA - 1982). The SBWMA was a Joint Powers Authority of 12 local government jurisdictions (Atherton, Burlingame, East Palo Alto, Foster City, Hillsborough, Menlo Park, Redwood City, San Carlos, San Mateo, County of San Mateo and the West Bay Sanitary District).  Through a JPA, local jurisdictions could establish strategic oversight and management of service providers that collect, process, recycle and dispose of materials as Assembly Bill 939 (1989) loomed on the horizon. AB 939 changed the way that solid waste was processed and imposed local mandates related to reduction, recycling, and reuse of products in the waste stream.

State mandates triggered changes in collection and processing requirements and the SBWMA created a model franchise agreement that all members ultimately adopted with Recology, a solid waste collection and processing vendor. In addition, the SBWMA took control over the processing of solid waste and recyclables. Taking on debt, the SBWMA built, owns and manages the Shoreway Environmental Center in San Carlos. The cost of the facility is borne by all member agencies.

Over the last 30 years, the land use demographics (commercial, industrial, and residential) of most of the larger SBWMA member agencies has changed dramatically. This caused a significant shift in the solid waste profile being processed at the Shoreway Facility and in turn caused an increase in the costs for each member agency due to changes in processing costs, expansion costs, and the costs of State recycling and composting mandates. However, Atherton’s land use demographic and requirements did not change. But, as a member of a Joint Powers Agency and co-owner of the Shoreway Facility, the Town’s cost, and thereby the resident’s costs, increased anyway.

In 2018, the Town began evaluating its continuing membership in the SBWMA and its continuing franchise with Recology. The Town was aware of several new pieces of State legislation on the horizon, such as SB 1383, that could significantly impact local costs and would require further expansion of the Shoreway Facility. The SBWMA began to evaluate ways to expand its facility and, over the Town’s objections as a singular voting member, opted to incur another $20 million in debt to fund the expansion.

In 2019, the Town opted to move forward with a proposal to exit the SBWMA by December 2020 as a means of stemming the potential for significant cost increases to Atherton residents. The Town entered a franchise agreement with Greenwaste Recovery beginning January 1, 2021, ending its long-term relationship with the SBWMA and Recology. 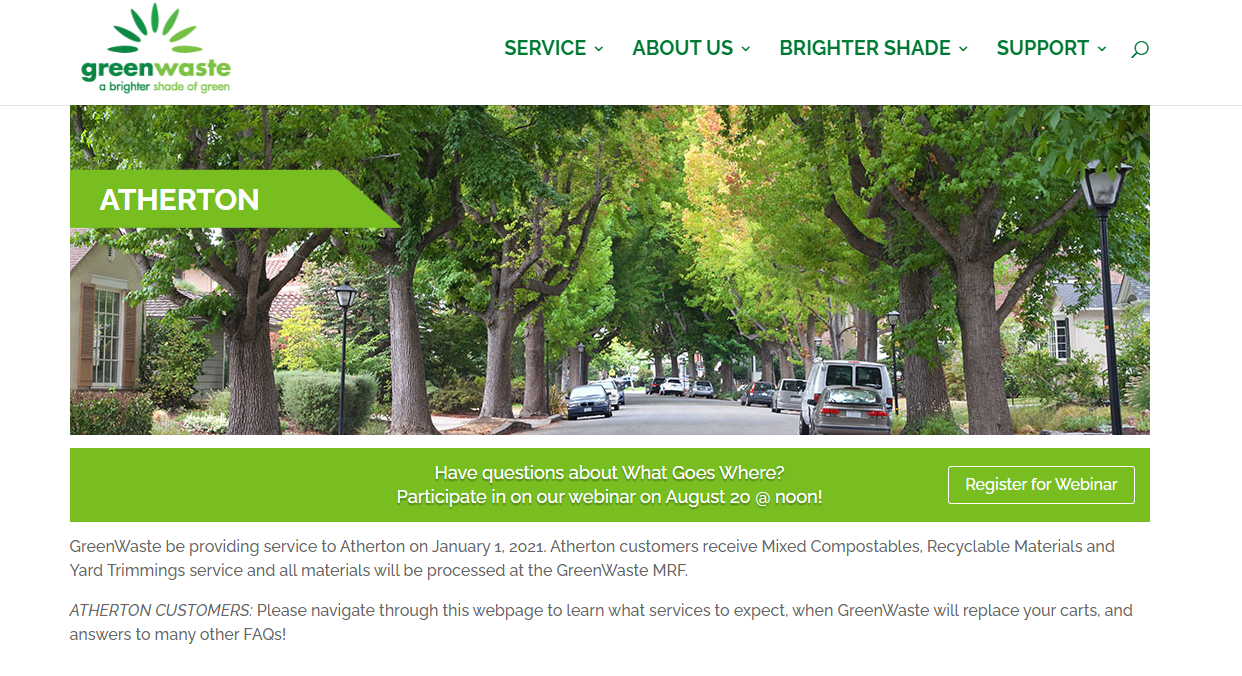 Trash, recyclables and organics are collected weekly. Residents are encouraged to place the recycling containers at the curb no sooner than the evening prior to the pickup and to remove them as soon as possible after pickup, but no later than the evening of pickup. 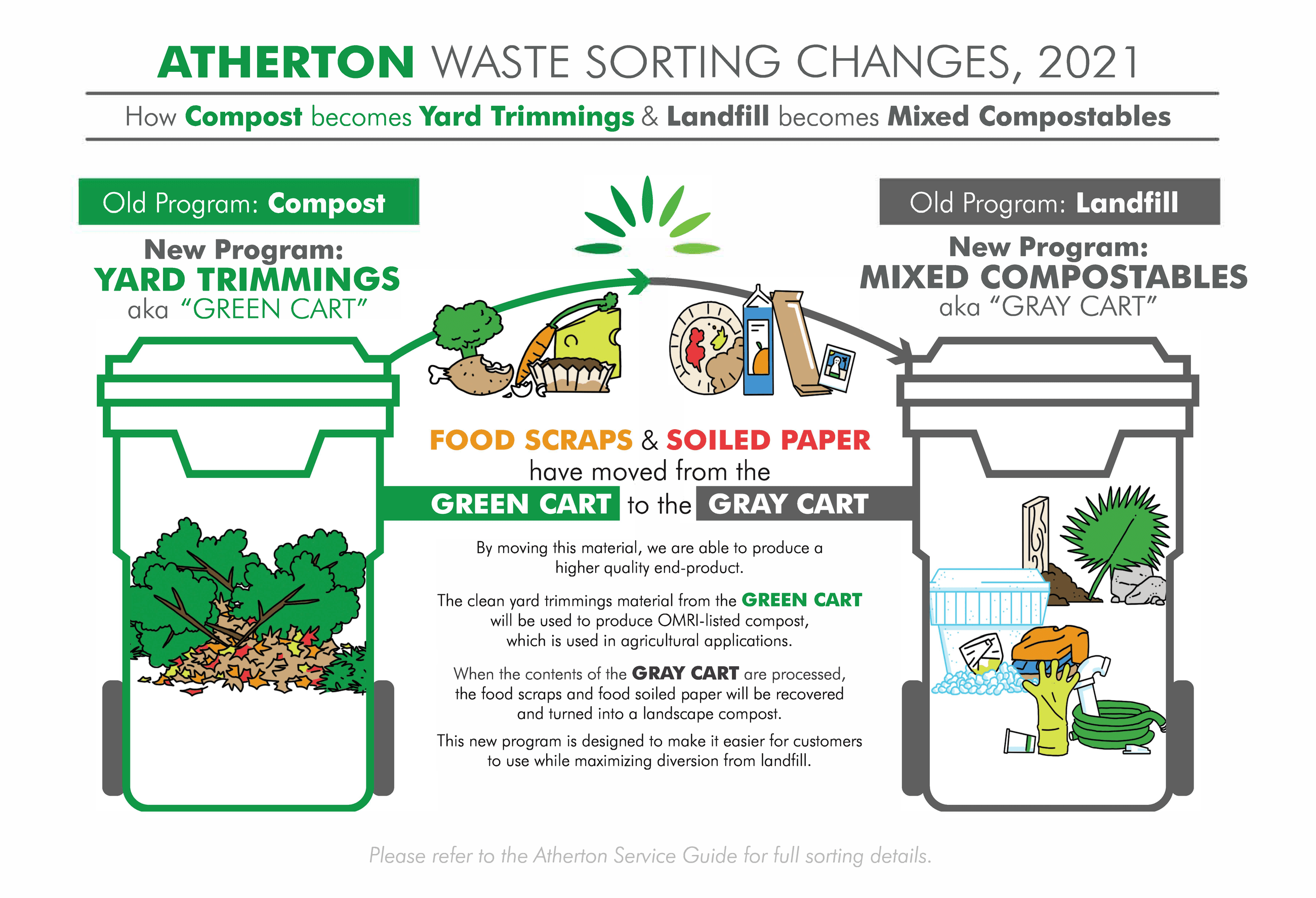 Residents should first contact GreenWaste Recovery at (650) 798-5999 about their concerns. In general, most problems can be resolved with a phone call. The Town's agreement requires GreenWaste to be responsive to residents' needs, and procedures are in place if there are patterns of poor customer service.

Service schedules remain the same as in previous years; but there may be some adjustments required to balance routes. Please contact GreenWaste for additional questions.

The new California Assembly Bill (AB) 341 requires all businesses that generate four (4) or more cubic yards of garbage per week to recycle by July 1, 2012. The specific statutory language for AB 341 can be found in the State’s Public Resources Code: PRC Division 30, Part 3, Chapter 12.8, Section 42649.

Businesses include, but are not limited to:

The purpose of the new law is to:

In addition to having recycling services services provided by GreenWaste Recovery, customers can also self-haul the recyclables or arrange for pickup services.

Atherton requires applicants for demolition and building permits to execute and adhere to a Waste Reduction and Recycling Plan. Contact the Town’s Building Department for additional information.